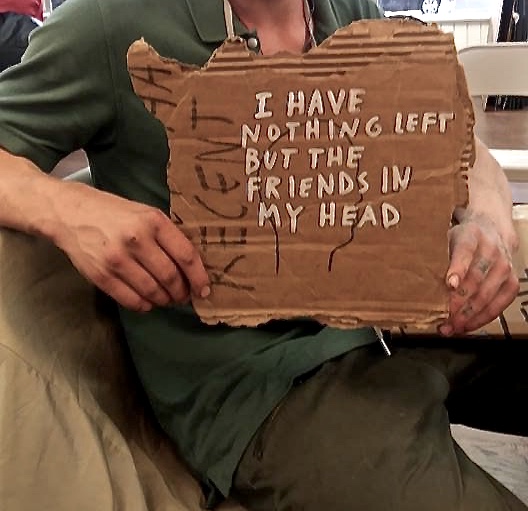 Malayna (my 13-yr-old daughter) and I were talking about my new gig teaching a 10-week textile workshop series at Kensington & Somerset. I told her how we had a mix of people – some of our friends and a few people who came in from the streets. I told her about T, who came in from the Ave, and how he told us his stuff was recently stolen. That stuff included his sketchbook and art supplies. He was drawing on cardboard because that’s what he could find on the streets. She was sad about this part – being an artist she knows how important her art supplies are. I happened to have a few small pieces of cardboard in my bag, so I gave him those. Kathryn offered him some wall space to display his artwork. The first thing I thought when he said his sketchbook was stolen was, “do I have a sketchbook in my car?” I think no matter how long I do this kind of work (with those who are homeless & in active addiction), I will forever be moved by how beautiful and young and smart and talented some of these men & women are. T looked like a skater, or a surfer, but here he is, stuck in his addiction in Kensington. In the “real” world (because this part of Kensington is truly like another world sometimes), we may have never crossed paths, yet here we are sitting in a storefront in Kensington making art together. Such a simple yet beautiful thing and I am SO thankful I get to do this. As Malayna said: “mom, this sounds like your dream come true.”